Malory, Thomas, Alfred W. Pollard, and Arthur Rackham. The Romance of King Arthur and His Knights of the Round Table. New York: The Macmillan Company, 1917. 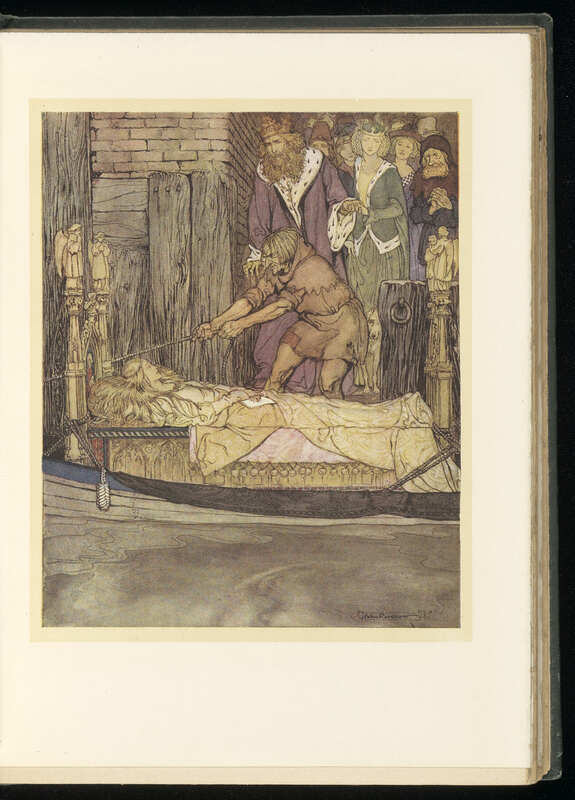 Arthur Rackham started his work on The Romance of King Arthur as a continuation of the Victorian tradition of depicting English nationalism, pride, and moral ideals through the Arthurian story. But, like many of his turn-of-the-century contemporaries, he no longer believed in this “Golden Age” of Camelot after witnessing the effects of World War I. Many find Rackham’s work to be both beautiful and haunting. Some art historians believe his illustrations were inspired by the work of Aubrey Beardsley, who also illustrated the Arthurian legend. Beardsley’s work was often characterized by experts as “sinister” and shows a darker side to the Arthurian legend through his use of long dark lines, curvy figures, and ornate foliage. On the other hand, Rackham is noted for his use of ink and watercolor. In his illustration of Elaine, the “beautiful” dead maiden is contrasted with the grisly boatman and the onlookers of the court, who exhibit mixed expressions of sadness and curiosity. Guinevere herself looks displeased. While the message of the maiden’s death is intended for Lancelot, he does not appear in Rackham’s art. Lancelot’s absence draws more tragedy to the work since the maiden remains overlooked by the knight even at the time of her death.