Morris, William, and Jessie M. King. The Defence of Guenevere and Other Poems. London: John Lane, The Bodley Head, 1904. 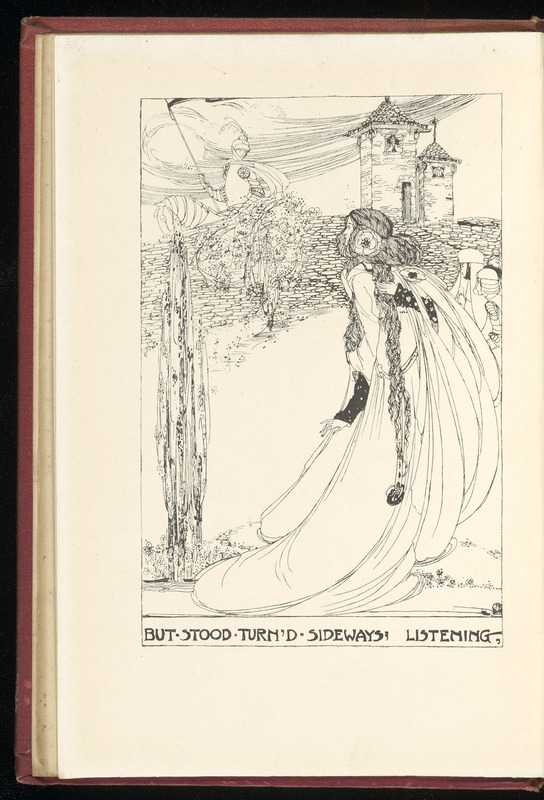 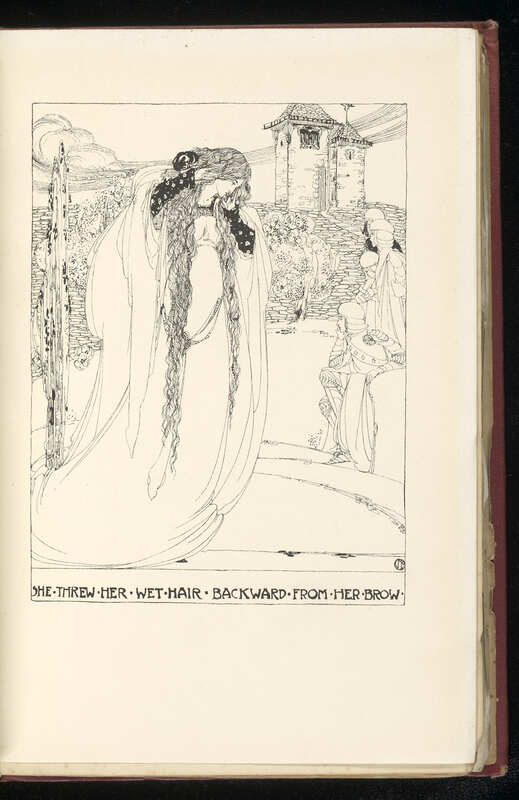 She threw her wet hair backward from her brow 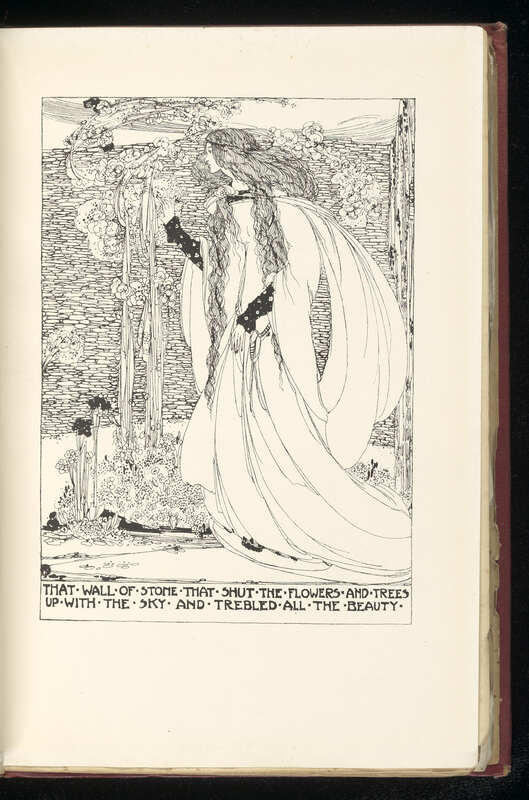 That Wall of Stone That Shut The Flowers... 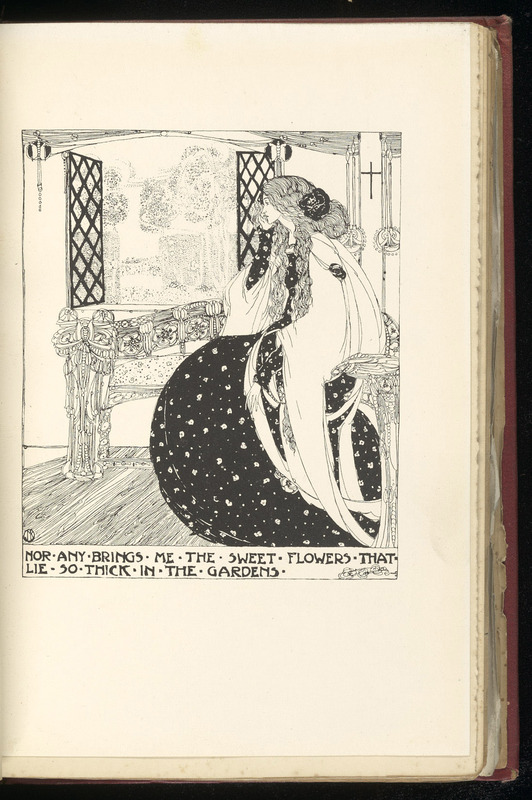 Nor Any Brings Me The Sweet Flowers... 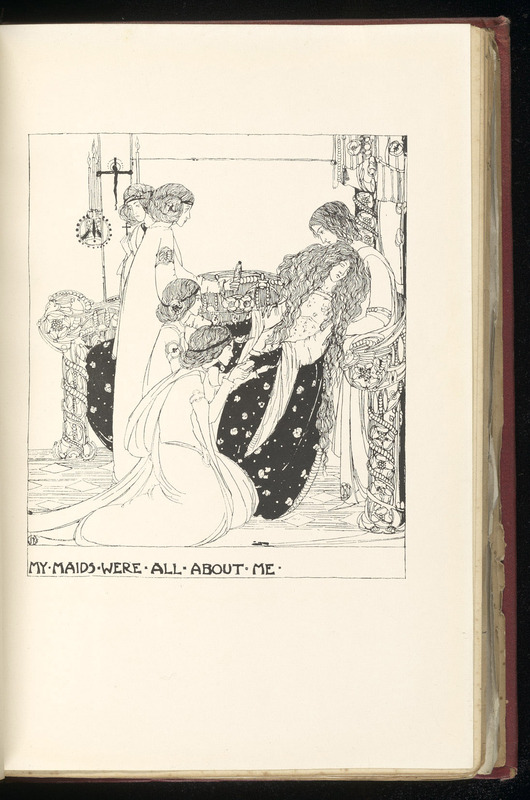 My Maids Were All About Me 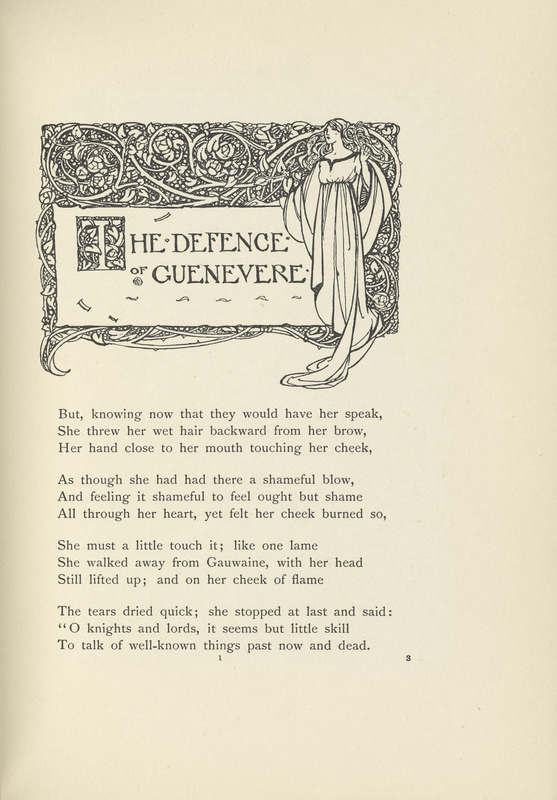 The Defence of Guenevere pg 1 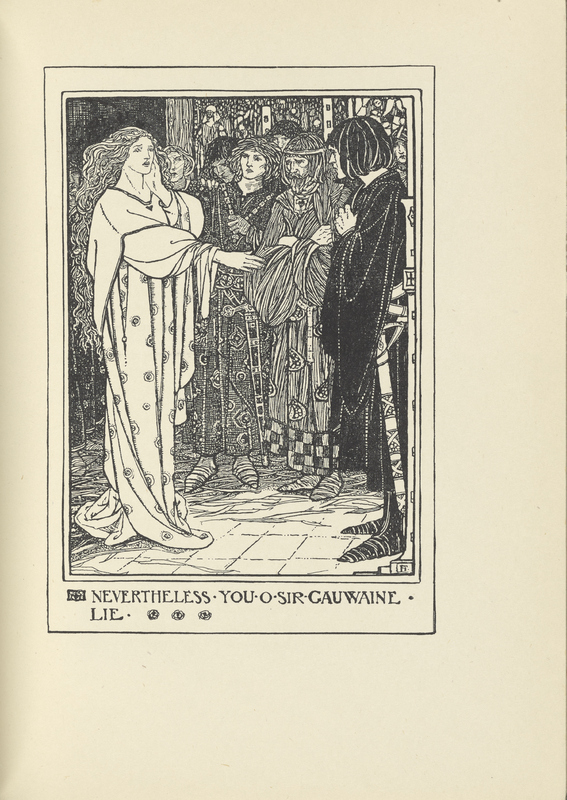 The Defence of Guenevere pg 6 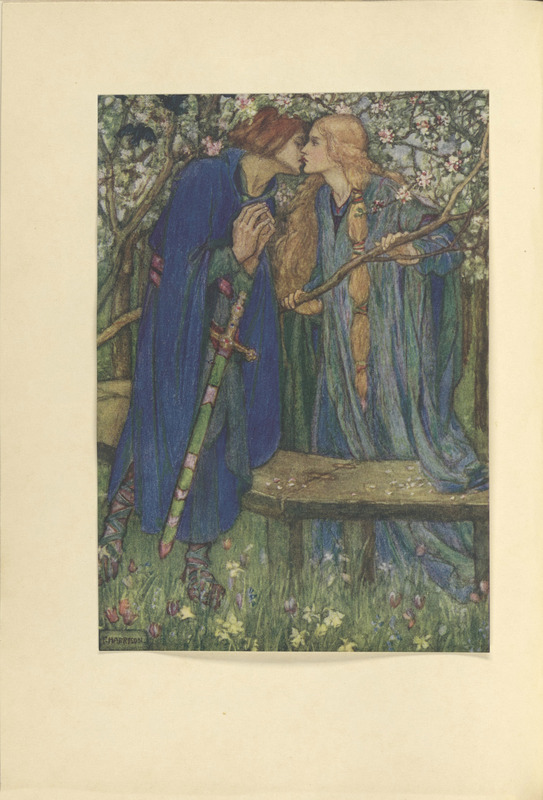 William Morris (1834-1896) famously designed and created furniture, textiles, and other decorative arts as well as poetry and novels that dealt heavily with medieval themes. Through his time as a student at Oxford, Morris was influenced by Tennyson’s Arthurian works. Morris published The Defence of Guenevere and Other Poems in 1858; in the central poem, Guenevere speaks on her own behalf while awaiting execution for adultery at Camelot (from which she is rescued by Lancelot). The poem focuses on Guenevere’s emotional debate concerning her religious faith, her deep passion for Lancelot, and her loveless marriage to Arthur.

Here we see two women artists who illustrated Morris’ Arthurian work. Jessie M. King (1875-1949) was a Scottish illustrator influenced by the Art Nouveau style, which she learned at the Glasgow School of Art. This movement was inspired by natural forms—often greenery—and prioritized senses of inventiveness and movement. King pioneered the Glasgow Style, which is characterized by its geometric and rectilinear stylization of nature, usually birds or flora. King was known for her pen and ink line drawing. Outside of illustration, she designed fabric, costumes, jewelry, book covers, murals, and more. Her work has often been described as similar in aesthetic to that of Aubrey Beardsley. In 1902, she won first prize at the first international exhibition of decorative art, held in Turin. This award established King as a prominent book illustrator and brought her the commission for Sebastian Evan’s translations of The High History of the Holy Graal, followed by a commission for The Defence of Guenevere by William Morris.

In 1904 publisher John Lane at the Bodley Head commissioned King to design the cover and create twenty-four full-page illustrations and page decorations for Morris’ The Defence of Guenevere and Other Poems. The edition contained thirty of Morris’ poems originally published in 1858. Many of King’s figures wear medieval clothing with Celtic or Middle Eastern decorative motifs. The book’s binding is a dark red canvas with gilding on the top edge and gold stamping on the cover and spine. The title is in gilt lettering designed by King and is characteristic of the Glasgow Style. A woman on the front cover with her arms outstretched, most likely Guenevere, wears a halo of stars and is bookended by the Glasgow rose—a stylized geometric rose influenced by embroidery and the earlier Pre-Raphaelite movement. Analyzing the cover of the text, Clare Broome Saunders remarks that “the cover image represents the aspects of Guenevere on which King will focus: the torches suggest passion; the doves evoke true love, and the star-chain shows the queen locked in her marriage and social role” (167). Early images of King’s Guenevere focus on the queen’s relationship with Lancelot and carry no sense of judgement from the artist. The queen first appears blissfully happy. Yet, in each subsequent image Guenevere becomes saddened and is illustrated in more confined and dark spaces. Of the two final images, “Nor any brings me the sweet flowers that lie so thick in the gardens,” and “My maids were all about me,” one depicts the queen’s body veiled under heavy billowing robes featuring rose adornments. In these two final images, Guenevere’s sex is not the focus of her characterization; rather, only the queen’s grief is put on display. However, King’s final illustrations show a transformed Guenevere, worthy of celebration and wearing a halo of stars. As a whole, “King presents Guenevere as a desiring and sensual woman, caged by the confines of her social role” (171).

Florence Harrison (1877-1955), a fellow Glasgow School artist, was born in Australia but spent a majority of her life in England. She was known for her Art Nouveau and Pre-Raphaelite illustrations. She illustrated books by Christina Rossetti, William Morris, and Alfred, Lord Tennyson, and worked primarily for the publishers Blackie & Son. Harrison created the bulk of her work between the World Wars. Harrison first illustrated Guinevere and Other Poems in 1912, and a newer edition with fewer images appeared in 1923.

Harrison, like King, also illustrated the Early Poems of William Morris and additionally two editions of Tennyson’s “Guinevere.”  The only color image of Guenevere in Early Poems of William Morris appears on the front piece and depicts a scene where the queen recalls first embracing Lancelot. Thanks to its placement early in the edition and its prominence as the only colored image of the queen, Saunders argues that the illustration “…highlights the focus of Morris’s depiction of the queen, her enduring, true love for Launcelot, despite the sorrow and penitence at the destruction that this love causes” (178). In the image a hesitant Lancelot leans in for a kiss. The knight’s hesitation and the blooming spring flowers represent the blossoming of young love. Guenevere, who is situated behind a bench (which itself foreshadows her imprisonment), confidently leans over the barrier and kisses Lancelot with her eyes open, suggesting she is unashamed of their love.