Kerr, Dorothy B. M. The Lady of Shalott, 1903. From the collection of Alan Lupack and Barbara Tepa Lupack. 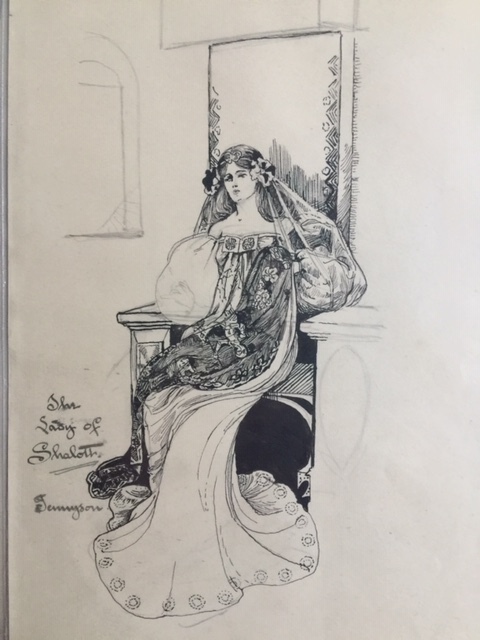 The Lady of Shalott

Dorothy Beresford Maule Kerr was an artist whose work has been described as embodying “…the spirit of self-betterment that characterised the so-called ‘New Women’ of the Edwardian era—free-spirited, fierce women, emboldened by the suffragists, who broke apart the traditional female roles” (Somerset & Wood). Born into a middle-class military family, Kerr attended art school with the hopes of one day becoming a professional artist. Kerr’s drawings, most often portraits, show women engaged in both traditional domestic activities as well as activities which – at the time – only men could pursue. In particular, Kerr’s work engages with social politics of the day— “the women she depicts include ‘Revolting Daughters’, a reference to the influential 1894 article ‘The Revolt of the Daughters’ by the journalist B.A. Crackenthorpe, which called for greater freedom for unmarried women in their twenties” (Somerset & Wood). Young women in Kerr’s portraits can be seen going on dates, dancing, and participating in other sociable activities less commonly depicted in Victorian portraits. In her illustration of "The Lady of Shalott," Kerr’s inspiration from the Art Nouveau tradition is visible in the stylized curve and intricate details of the maiden’s dress. The Lady sits on a throne, making her appear more like a queen than simply a lovesick young girl. The woman holds in her hand her weaving, but she looks off in the distance, clearly longing for more.