Clay, Beatrice. Stories of King Arthur and the Round Table. Illustrated by Beatrice Clay. J.M. Dent & Sons Ltd., 1920. From the collection of Alan Lupack and Barbara Tepa Lupack. 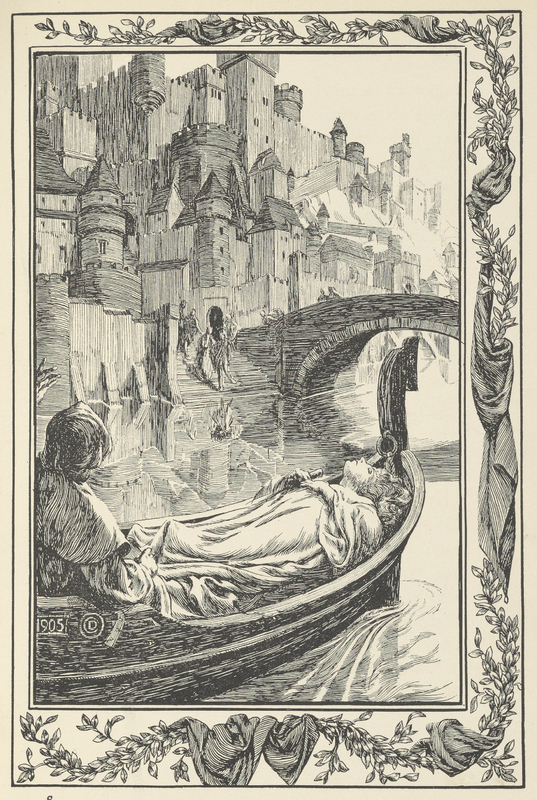 The most frequently illustrated scene from The Lady of Shalott—by women and men alike—is that of the Lady/Elaine in her barge. Beatrice Clay’s Stories of King Arthur, published by J.M. Dent & Sons Ltd., presents an Arthurian adaptation for young readers. In her introduction, Clay explains the historical and literary origins of King Arthur and cites information that had been used in her earlier version of this text titled Stories from Le Morte Darthur and the Mabinogion (1901). In Stories of King Arthur, Clay trains more of an emphasis on women in comparison to the Stories from Le Morte Darthur, as demonstrated by the inclusion of the character Morgan le Fey and the added illustrations of female figures by Dora Curtis. In the image of Elaine in the barge, Curtis uses foliage to frame the scene in an Art Nouveau style. As Elaine emerges from the bottom left of the frame, audiences are drawn to look at her before anything else. She wears a simple white gown with no other embellishments, in contrast to the rich jewelry and embroidery described by most authors. Here, she is simply a dead woman laid out in a boat. Camelot is far in the background with Arthur, Guinevere, and other onlookers on their way. However, since the barge is far from the shore and Camelot stretches across the frame, the viewer has the impression that Elaine will continue onward to a final resting place beyond the court and the piercing gaze of the attendants.