Chesson, Nora. The Tales from Tennyson, Told by Nora Chesson. Illustrated by Sophia May Bowley and Frances Brundage. London: Raphael Tuck & Sons, n.d. From the collection of Alan Lupack and Barbara Tepa Lupack. 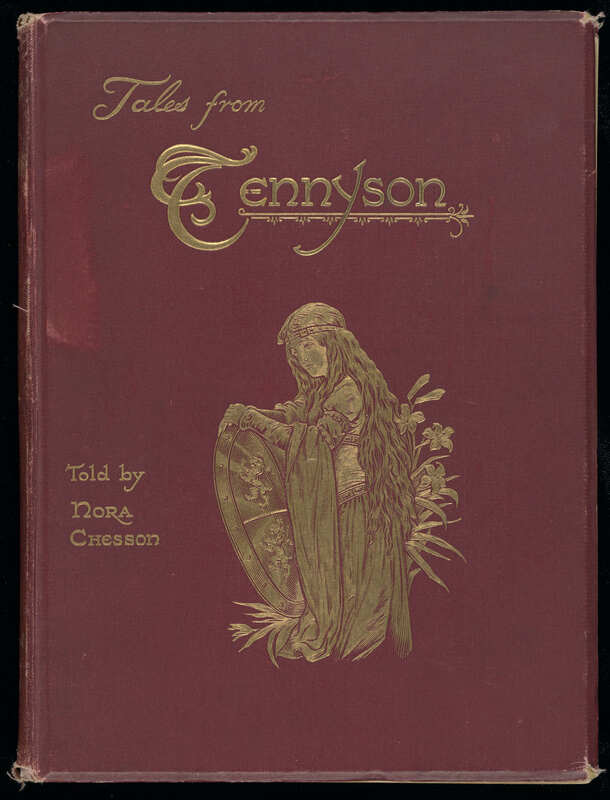 Cover for The Tales from Tennyson Told by Nora Chesson 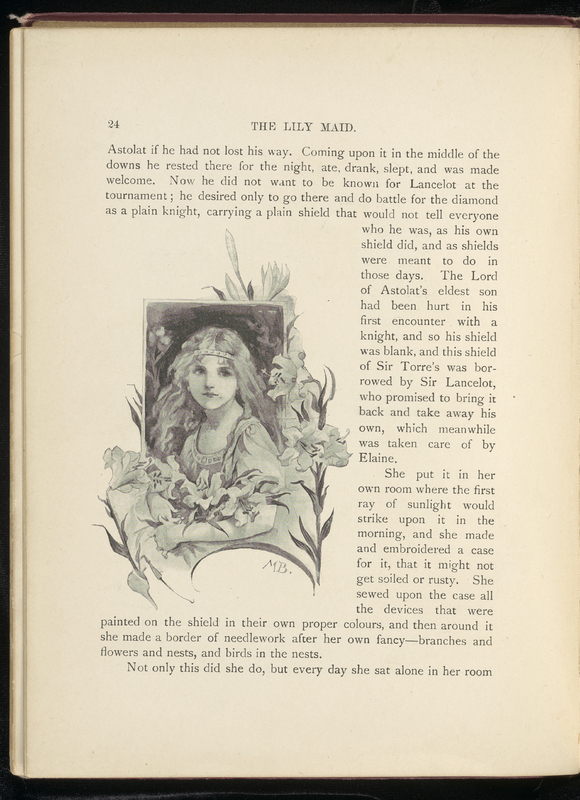 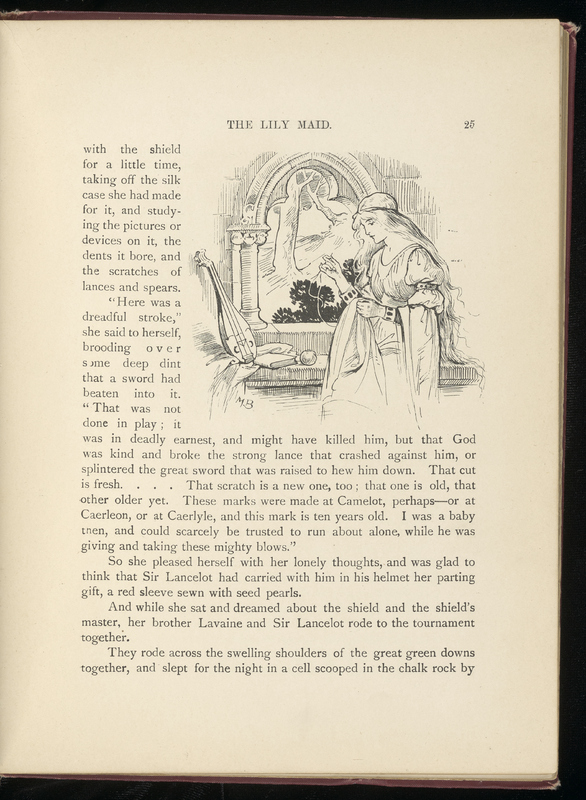 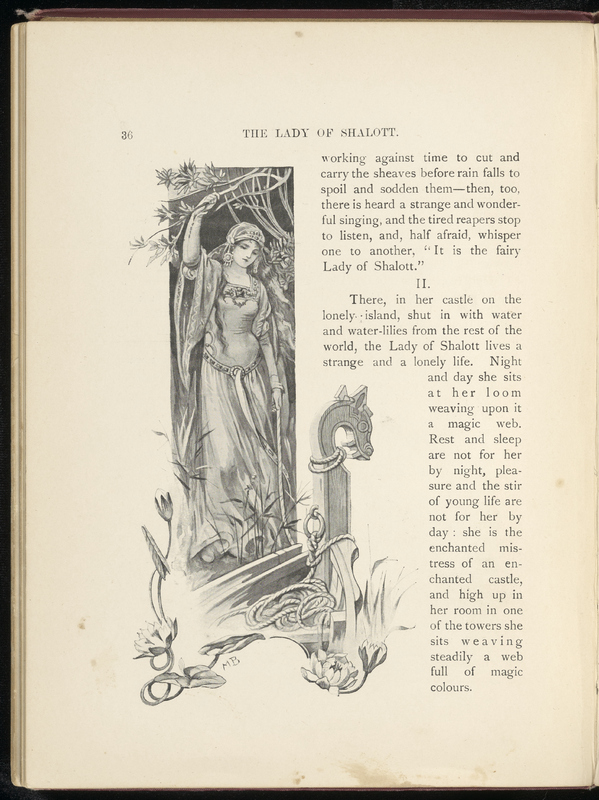 The Lady of Shalott lives a strange and lonely life, Frances Brundage 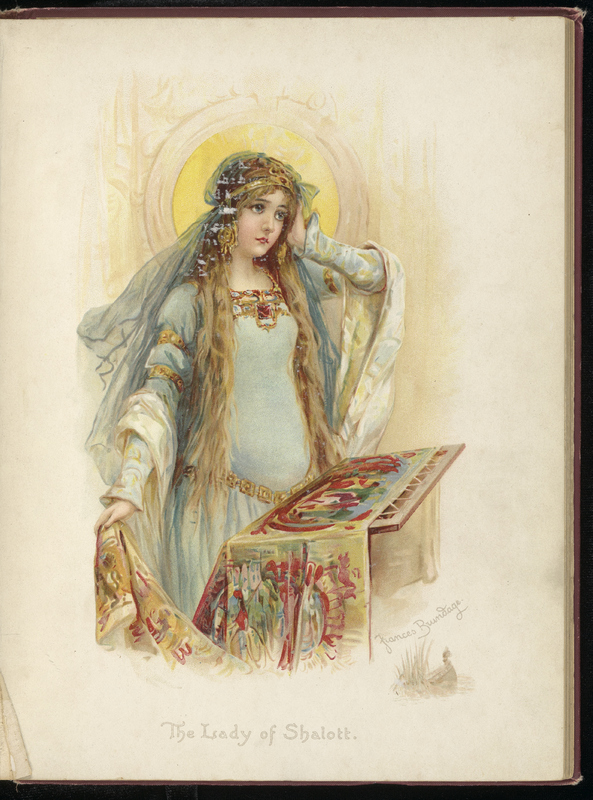 The Lady of Shalott, Frances Brundage

The Tales from Tennyson by Nora Chesson delivers another brilliant example of women authors revising Tennyson with their own agendas and adapting the Arthurian material for children. Published by The Raphael Tuck & Sons Company, this book contained eleven short stories.

Unlike prior artists, illustrators such as Sophia May Bowley and Frances Brundage highlight the youth of Elaine, depicting her as a child rather than as a young woman. Many Victorian and early twentieth-century artists focused on Elaine’s naïveté and the sorrow that surrounds first love. Elaine’s interest in Lancelot is understood as an innocent girlish crush. Elaine as the child-maiden stood for ideal womanhood, chastity, and domesticity – all in need of protection from the outside world by chivalric men. Debra Mancoff argues, “As a girl who hovered on the brink of maturity with ‘deep, womanly emotions’ stirring her heart but whose insular childhood ‘prevented her from understand and controlling them’, the tender yet troubled figure of Elaine touched the emotions of readers and viewers alike” (18). ASL: This citation needs to be clarified ('quoted in') A young Elaine appears on the cover of Chesson’s book, holding Lancelot’s shield—which is about her size. Elaine is surrounded by lilies, a reference to Tennyson’s description of her as “the lily maid of Astolat.” Sophia May Bowley’s “The Lily Maid” is similar to the book cover, showing a young Elaine surrounded by lilies, a symbol of purity. “Elaine Sews a Cover for Lancelot’s Shield” features an older Elaine in a moment of calm domesticity—musical instruments and books sit near her, highlighting her many accomplishments.

In Brundage’s illustration, the focus is on Elaine herself and not her death, which is subtly foreshadowed in the small boat at the bottom right. Instead, Elaine stands tall, holding her tapestry work. She is surrounded by a round glowing light from the window behind her. The illustration is evocative of a saint: Elaine holds her head in a manner that suggests that she has already looked out her window and feels the curse upon her, yet she remains standing and strong. “The Lady of Shalott” is the most striking of Brundage’s images. In this illustration, an adult Elaine stands before the barge that will later carry her body to Camelot. Rarely, if ever, is Elaine shown in front of the ship before her death. Bowley shows a contemplative, even sullen, Elaine, who is unprepared or unwilling for what transpires next.